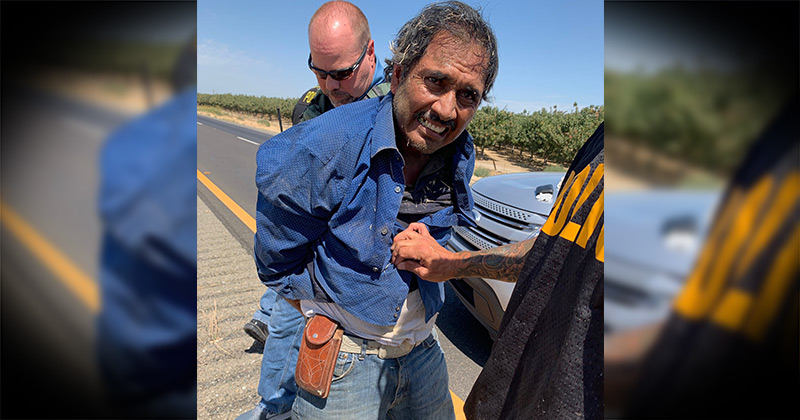 An illegal alien who was previously in police custody has been arrested again, this time for shooting a California police officer.

51-year-old Guadalupe Lopez-Herrera of Dos Palos was arrested by California Highway Patrol on Thursday after a 20-hour manhunt and an hour-long car chase.

Lopez-Herrera, who is in the country illegally and was arrested in January for domestic violence, was being sought after for allegedly threatening his wife and other family members.

Merced County Sheriff’s Officer Deputy Daryl Allen, said, “We had word he was hiding in this residence. It was on Sunday when this domestic violence occurred, deputies went out to investigate. In moments, shots were fired.”

One officer was shot in the leg and another bullet struck his bulletproof vest, but he was still able to join his colleagues in the pursuit once Lopez-Herrera fled the scene.

“This is the suspect accused of shooting a Merced County detective yesterday,” ABC 30 North Valley reporter Sara Sandrik posted to Twitter along with a photo of Lopez-Herrera.

“He was just arrested on I-5 near Kettleman City following a pursuit from Paso Robles.”

#BREAKING Captured! This is the suspect accused of shooting a Merced County detective yesterday. He was just arrested on I-5 near Kettleman City following a pursuit from Paso Robles. @ABC30

Merced County Sheriff Vern Warnke said the shooter was in the U.S. illegally and that he was previously in police custody, but that sanctuary policies kept law enforcement from deporting the criminal alien.

“This person is not a legal citizen within the United States. We had him in our custody in January of this year. And because of the folks in Sacramento limiting our ability to cooperate with ICE, we could not turn him over,” he vented in a Thursday press conference.

Watch the full press conference below:

California’s SB 54, the 2017 California Senate Bill 54 signed by former Democrat Gov. Jerry Brown, is the piece of legislation that is keeping law enforcement from cooperating with Immigration and Customs Enforcement on the arrests of illegals.

The state’s current Democrat Gov. Gavin Newsom is upholding the sanctuary status, even saying California will provide “sanctuary to all who seek it” during his inaugural speech.

However, not all Californians are satisfied with the state’s liberal policies, as Sheriff Warnke made clear when he said, “Bottom line is our immigration policies need to be revamped because we’re gonna continue to have more of this situation happen. We knew ahead of time this guy’s potential for violence was there.”

There must be some sort of accountability for those giving criminal illegal aliens a safe space to continue breaking the law.