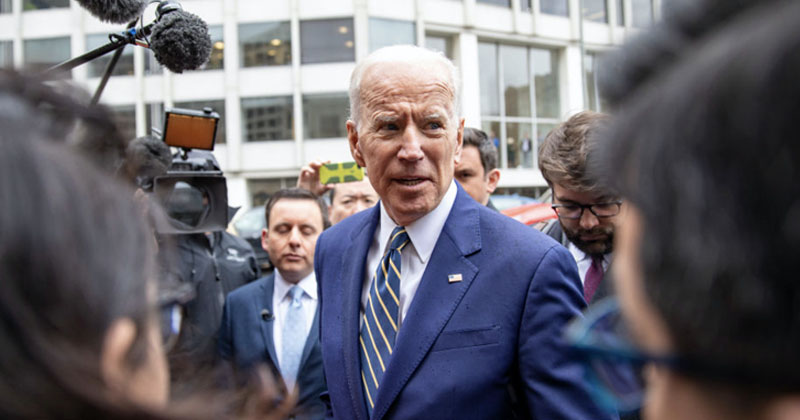 As Joe Biden plummets in the popularity, Democratic lawmakers and the MSM have gone into panic mode after a whistleblower report of political malfeasance during a July phone call between President Trump and Ukrainian President Volodymyr Zelensky about the Biden family’s dealings turned out to be fake news.

Since the initial report, the Trump-Zelensky call has been downgraded to remove implications of a quid pro quo – and attention is now turning to what the Bidens actually did.

And to protect Biden – who is still the Democratic 2020 frontrunner (barely), the media is simply ignoring the facts in order to peddle an election interference narrative.

“They want to bypass the fact that Joe Biden, in his own words, in multiple interviews, said that he threw the straw and had to go to the Ukraine and have a conversation and tell them to fire the individual that was doing the investigation into his son…,” former Trump campaign manager Corey Lewandowski told Breitbart News on Saturday – adding that the new narrative is “Oh, my God, Donald Trump might have had a conversation, asking if there was anything done” related to the Hunter Biden investigation while they hyperventilate about Trump talking to Zelensky.”

On Sunday, President Trump told reporters before departing for events in Texas and Ohio that his call with Zelensky was “largely congratulatory, was largely corruption, all of the corruption taking place.”

“It was largely the fact that we don’t want our people, like Vice President Biden and his son, creating to the corruption already in the Ukraine,” he added – insisting that an anonymous intelligence whistleblower had raised “false alarms” over his conversations with a foreign leader – and he would have no problem with his attorney Rudy Giuliani testifying to Congress about the whole thing, according to Bloomberg.

“You can’t have people doing false alarms like this,” said Trump.

In a July 25 phone call with Zelenskiy, Trump asked the Ukrainian leader to investigate Biden’s son Hunter, according to a person familiar with the call. Trump defended the call on Sunday.

“I said nothing wrong, it was perfect. I assume many people are on the line. I know that before I make the call,” Trump told reporters as he departed for events ahead of the United Nations General Assembly next week. “What wasn’t perfect was the horrible thing Joe Biden said.”

The Washington Post has reported that the whistle-blower’s complaint concerns Trump’s interactions with Zelenskiy. Ukrainian Foreign Minister Vadym Prystaiko said in an interview with a Ukrainian news outlet, Hromadske, on Saturday that “Trump did not pressure Zelenskiy.” –Bloomberg

Buried in a recent CNN article noted by the Daily Wire’s Ashe Schow, “The whistleblower didn’t have direct knowledge of the communications,” adding “Instead, the whistleblower’s concerns came in part from learning information that was not obtained during the course of their work.”

“President Trump is interested, his advisor, [Rudolph] Giuliani, newspapers, Democrats, Republicans are interested in whether pressure had been put on Ukraine. I want to say that we are an independent state, we have our own secrets,” said Prystaiko.

“I know what the conversation was about and I think there was no pressure. There was talk, conversations are different, leaders have the right to discuss any problems that exist. This conversation was long, friendly, and it touched on a lot of questions, including those requiring serious answers.”

Three Democratic-led house committees, meanwhile, have launched a “large-scale investigation” into whether Trump pressured Ukraine – while as noted above, their only go-to now is that Trump attempted to interfere in the 2020 US election – while absurdly glossing over the fact that Biden openly bragged, on camera, about pressuring Ukraine to fire the guy investigating his son!

Biden, meanwhile, lashed out on Saturday – suggesting the press should instead investigate Trump, who knows Biden will “beat him like a drum.”

Now let’s do the Bidens’ adventures in China.