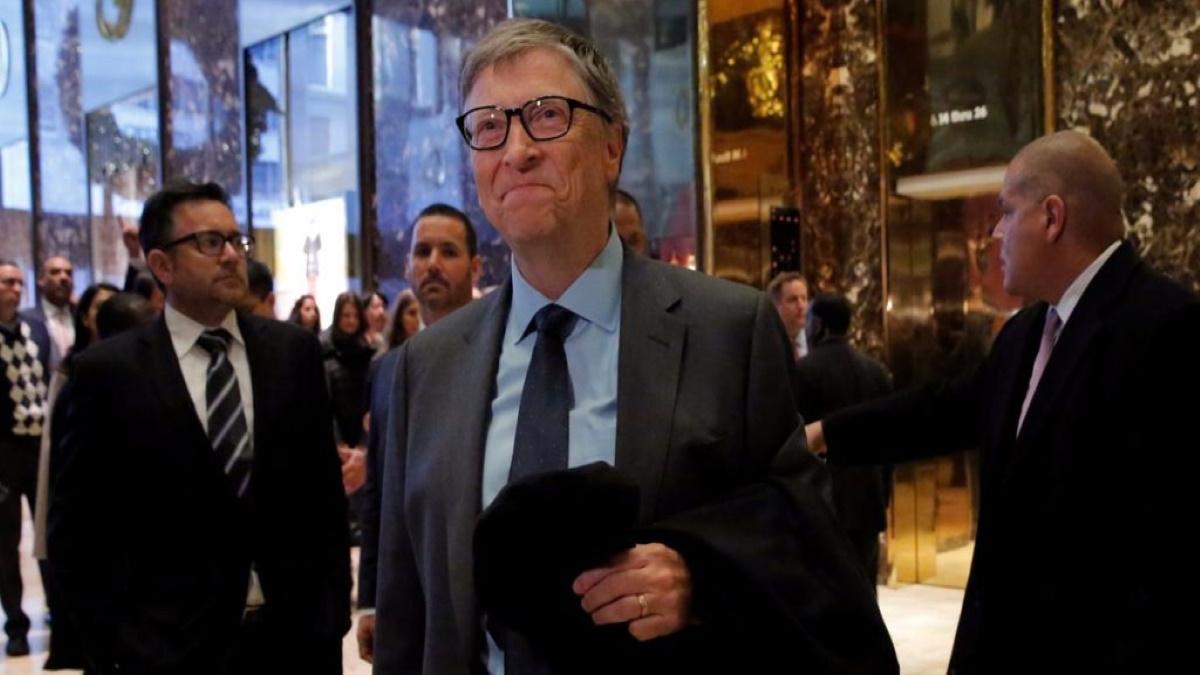 YOU ARE SEEING THE FACE OF EVIL ABOVE

The President Is Racing To Save Lives

President Donald Trump is fighting to find a medical solution for Coronavirus in the short term, expressing hope that the anti-malaria drug Chloroquine/hydroxychloroquine can help patients suffering from the Chinese virus.

The truth is that President Donald Trump is locked in an intense power struggle with Bill Gates, who is pushing his vaccines, which may not be available to the public until after November’s election.

Gates has a lot of pull in the medical world, he has a multi-million dollar relationship with Dr. Fauci, and Fauci originally took the Gates line supporting vaccines and casting doubt on Chloroquine. Coronavirus response team member Dr. Deborah Birx, appointed by former president Obama to serve as United States Global AIDS Coordinator, also sits on the board of a group that has received billions from Gates’ foundation, and Birx reportedly used a disputed Bill Gates-funded model for the White Houses’ Coronavirus effort.

Gates is a big proponent for a population lockdown scenario for the Coronavirus outbreak.

National Institute of Allergy and Infectious Disease (NIAID, a division of National Institutes of Health, NIH) director Dr. Anthony Fauci, who is represented by the Aurumn Speakers Bureau, initially criticized Trump’s hopeful assessment of Chloroquine, saying in an interview with CNN’s Anderson Cooper that “There’s no magic drug for coronavirus right now,” and lectured, “Let me put it into perspective for the viewers .. there has been anecdotal non-proven data that it [chloroquine] works… but when you have an uncontrolled trial you can never definitely say that it works.”

But now Fauci has changed his tune and launched a public relations campaign huddling closer to Trump. Fauci said that he would definitely prescribe Chloroquine for patients. “Yeah, of course, particularly if people have no other option. These drugs are approved drugs for other reasons. They’re anti-malaria drugs, and they’re drugs against certain autoimmune diseases like lupus. Physicians throughout the country can prescribe that in an off-label way. Which means they can write it for something it was not approved for.”

The true behind-the-scenes story is coming to light:

Here is what Gates said regarding Chloroquine in a Reddit Ask Me Anything session:

“There are a lot of therapeutic drugs being examined. This is one of many but it is not proven. If it works we will need to make sure the finite supplies are held for the patients who need it most. We have a study going on to figure this out. We also have a screening effort to look at all the ideas for Therapeutics because the number being proposed is very large and only the most promising should be tried in patients. China was testing some things but now they have so few cases that that testing needs to move to other locations,” Gates said.

Gates Is Funding Coronavirus Vaccine Candidates That Would Compete With Chloroquine, And Dr. Fauci’s Agency Is Co-Partnering On The Project

“Gates Foundation money is backing vaccine development on every front. Inovio Pharmaceuticals of Pennsylvania received $9 million from the Gates-backed CEPI, Coalition for Epidemic Preparedness Innovations, to develop a vaccine, INO-4800, which is about to test on humans in April, a suspiciously rapid time frame. In addition Gates Foundation just gave the company an added $5 million to develop a proprietary smart device for intradermal delivery of the new vaccine.

In addition Gates Foundation monies via CEPI are financing development of a radical new vaccine method known as messengerRNA or mRNA.

They are co-funding the Cambridge, Massachusetts biotech company, Moderna Inc., to develop a vaccine against the Wuhan novel coronavirus, now called SARS-CoV-2. Moderna’s other partner is the US National Institute of Allergy and Infectious Diseases (NIAID), a part of the National Institutes of Health (NIH). Head of NIAID is Dr Anthony Fauci, the person at the center of the Trump Administration virus emergency response. Notable about the Fauci-Gates Moderna coronavirus vaccine, mRNA-1273, is that it has been rolled out in a matter of weeks, not years, and on February 24 went directly to Fauci’s NIH for tests on human guinea pigs, not on mice as normal. Moderna’s chief medical adviser, Tal Zaks, argued, “I don’t think proving this in an animal model is on the critical path to getting this to a clinical trial…

Add to this the fact that the Gates Foundation and related entities such as CEPI constitute the largest funders of the public-private entity known as WHO, and that its current director, Tedros Adhanom, the first WHO director in history not a medical doctor, worked for years on HIV with the Gates Foundation when Tedros was a government minister in Ethiopia, and we see that there is practically no area of the current coronavirus pandemic where the footprints of the omnipresent Gates are not to be found. If that is to the good of mankind or grounds to be worried, time will tell.”

“Going into a Phase One trial within three months of getting the sequence is unquestionably the world indoor record. Nothing has ever gone that fast,” according to Fauci.

While it is uncertain that Moderna’s answer is the solution, Fauci notes that the only surefire way to stop an outbreak is to develop a vaccine. Moderna manufactures drugs around messenger RNA molecules that carry instructions to reprogram cells in the body to operate differently and beneficially. Currently, its genetic technology has not created a vaccine for humans.

The first study of the vaccine will take place at NIAID. If it is successful, a second trial would feature closer to hundreds of people. Pending the results of future studies and regulations, the vaccine may not be readily available until next year, Fauci said.

The grant is intended for use in the antibody combination’s preclinical study and a Phase I clinical trial. Gates Foundation’s $20 million funding could potentially grow into a total $100 million commitment—including the HIV antibody project—toward development of additional mRNA-based treatments for various infectious diseases, Moderna said.

“The foundation’s mission to help all people lead healthy and productive lives is well aligned with Moderna’s mission to deliver on the promise of transformative mRNA science to bring new medicines to patients,” Moderna CEO Stéphane Bancel said in a statement.

Moderna said the development effort would be led by its infectious disease–focused venture company, Valera…”

Fauci Is Tight with Bill Gates

“He’s very good about not overpromising,” Gates said of Fauci in 2018 as Gates worked on a universal flu vaccine. NIAID Council minutes from 2019 show Fauci’s agency identifying a Gates Foundation workshop as being of interest. Gates met with Fauci in 2017 “to discuss research opportunities in global health.” In 2010, Fauci was named to the Leadership Council of the “Decade of Vaccines” Collaboration, which the World Health Organization, Fauci’s agency NIAID, UNICEF, and the Bill and Melinda Gates Foundation convened.

Fauci hung out with Gates in 2018 at an NIH workshop:

Gates Admitted That He Stopped President Trump’s Planned Vaccine Safety Commission With Robert Kennedy Jr. in the Early Days of the Trump Administration

The American Journal of Managed Care reported on October 28, 2019:

“The National Institutes of Health (NIH) has announced plans to invest at least $100 million over the next 4 years to develop gene-based therapies for 2 diseases: HIV and sickle cell disease (SCD). The Bill and Melinda Gates Foundation (Gates Foundation) will also contribute $100 million to the goal of advancing these potential cures, with an aim toward providing affordable, globally available treatment that will be accessible to patients in low-resource settings.

According to the NIH, the collaboration between the organizations will focus on 2 key areas. First, it will identify potential candidate cures for preclinical and clinical evaluation, and second, it will define long-term opportunities to partner with organizations in Africa…

“This collaboration is an ambitious step forward, harnessing the most cutting-edge scientific tools and NIH’s sizable global HIV research infrastructure to one day deliver a cure and end the global HIV pandemic,” said NIAID director Anthony S. Fauci, MD, in a statement announcing the initiative. “We are taking into account those with the greatest need at the foundation of this effort, to ensure that, if realized, this exceptional public health achievement will be made accessible to all.”

Dr. Fauci Is Speaking At The World Vaccine Congress in September Alongside A Coterie of Public Sector and Private Sector Folks From WHO, CDC, FDA, Merck, Pfizer, etc.

The event is in Washington, D.C.

Fauci is a Hillary Clinton Admirer

Dr. Deborah Birx is garnering criticism for touting a disputed model for the Coronavirus outbreak prepared by the University of Washington’s IHME, a project of the Bill and Melinda Gates Foundation. Birx’s license to practice medicine in the state of Pennsylvania expired in 2014.

Deborah Birx Sits on the Board of The Global Fund, which is heavily funded by Bill Gates’ organizational network, as journalist Jordan Schactel discovered. The Bill and Melinda Gates Foundation gave the Global Fund a $750 million promissory note in 2012.

Patrick Howley is an investigative journalist covering national politics. He was instrumental in breaking the NXIVM sex cult, Paul Pelosi Jr.’s work with a company that did business in Ukraine, and the crimes of Jeffrey Epstein. Patrick previously reported for Breitbart, The Daily Caller, and was Editor-in-Chief for Big League Politics. Follow Patrick on Twitter: twitter.com/HowleyReporter