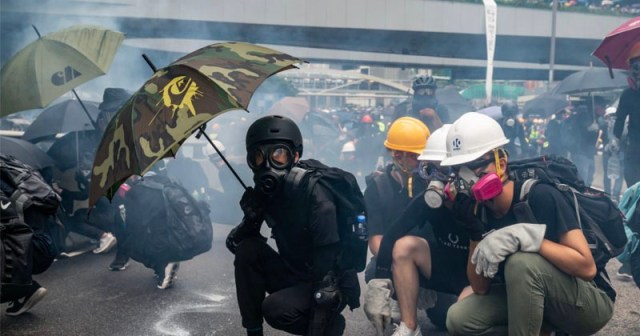 Update (10:32AM ET): Authorities fired a live round near Victoria Park as a warning to protesters.

A video on Facebook, meanwhile, appears to show the moment protesters discover an undercover officer firing what appears to be pepper rounds.

Authorties, meanwhile, are calling for calm.

“The president calls on protesters to express their calls through peaceful means and hopes all parties can resolve the social conflicts altogether,” said a spokesman for Legislative Council president Andrew Leung Kwan-yuen.

Protesters in Hong Kong returned to the streets in what Bloomberg has called “one of the city’s most violent days in its 13th weekend of social unrest,” after several top organizers were arrested and then released, including Joshua Wong, Agnes Chow and Andy Chan.

Tens of thousands participated in an unauthorized demonstration – many of whom threw objects and gasoline bombs over barriers at the government’s headquarters. After initially retreating in response to the crowd control measures, protesters returned to a nearby suburb and set fire to a wall on Hennessy Road in the city’s Wan Chai district.

While others marched back and forth elsewhere in the city, a large crowd wearing helmets and gas masks gathered outside the city government building. Some approached barriers that had been set up to keep protesters away and appeared to throw objects at the police on the other side. Others shone laser lights at the officers.

Police fired tear gas from the other side of the barriers, then brought out a water cannon truck that fired regular water and then colored water at the protesters, staining them and nearby journalists and leaving blue puddles in the street. –AP

The protesters were undeterred.

Several people were arrested and tossed into police vans.

“Violent protesters continue to throw corrosives and petrol bombs on Central Government Complex, Legislative Council Complex and Police Headquarters,” said the police in a statement. “Such acts pose a serious threat to everyone at the scene and breach public peace.”

Protesters in Hong Kong returned to the streets in what Bloomberg has called “one of the city’s most violent days in its 13th weekend of social unrest,” after several top organizers were arrested, including Joshua Wong, Agnes Chow and Andy Chan. Hong Kong police fired tear gas and sprayed protesters with blue dye from pepper-spray filled water cannons, while charging other protesters with shields and batons.

Protesters asked US President Donald Trump to take action and help the activists, who originally took to the streets to protest a controversial extradition bill which would have allowed China to bring suspects to the mainland to face trial in PRC courts.

Acting on orders from Beijing, Hong Kong rejected an application by the Civil Human Rights Front for a march to the Chinese government office. While previous marches have begun peacefully, police say that they have increasingly devolved into chaos and violence towards the end.

Paul Joseph Watson joins The Alex Jones Show to give his eyewitness account of the growing liberty movement in Hong Kong as the people face down Chinese Communist rule.