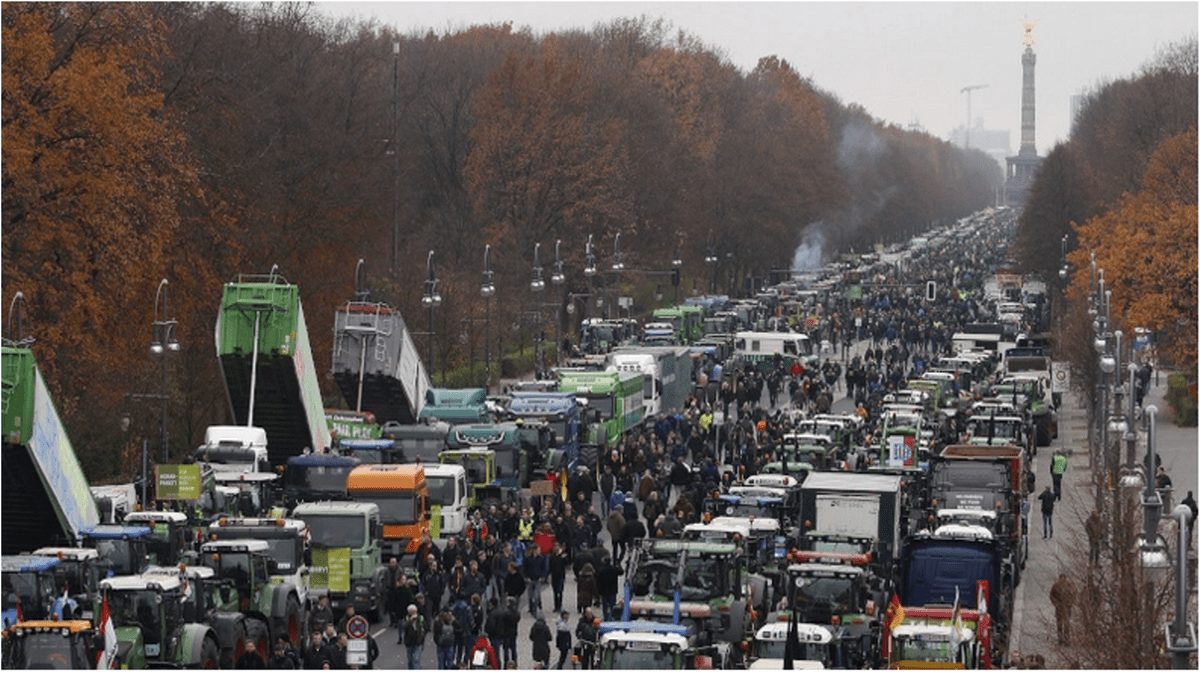 Farmers from across Germany have descended on Berlin to take part in a mass protest against the government’s agricultural reform package that foresees a reduction in the use of fertilizers, pesticides and insecticides.

Line after line, the area around the Brandenburg Gate in central Berlin was clogged up with tractors from all over Germany.

Farmers had driven them into the capital days in advance to be more visible to the general public as their mass protest got underway on this Tuesday in November.

The plot to surveil the Trump campaign went all the way to “the top” of the Obama administration, the president says.

They were highly aware they were causing traffic jams in downtown Berlin, but people needed to take notice and take an interest in why they were there, they argued.

“We can’t continue like this as overregulation is the last thing we need,” said an angry farmer from the Nordhorn area near the German-Dutch border, who has taken the trouble to drive his tractor to Berlin in an 11-hour ride. “We are not willing to accept what those at the top want us to do without consulting us upfront.”

“Those at the top” are German Agriculture Minister Julia Glöckner and Environment Minister Svenja Schulze.

They both presented an agricultural package in September saying that farmers would have to reduce their use of fertilizers, pesticides and insecticides with a view to curbing the dying of insects and reducing the nitrate content in the groundwater.

“Yes, we’ve made mistakes in the past, no doubt about that, but we’ve learned from them,” the pig and cattle farmer from near Nordhorn told DW. But we’re still the nation’s scapegoat as a whole when it comes to the nitrate debate,” he went on. “We’re not convinced that the measurements made recently are correct — I’ve got the impression that only the worst cases were reported, but all of us have are made to assume collective responsibility for the few sinners.”

“We want to see honest research into where the nitrate content in the groundwater really comes from,” said another farmer from Bavaria. “I’m not saying that our fertilizers don’t contribute to it,” he conceded. “But there are other causes as well — however, we farmers are the only ones targeted by the government, and that’s unfair.”

Another two men from family farms in Oldenburg (some 470 kilometers, 292 miles away from Berlin) said they couldn’t agree more.

“While everyone is targeting us farmers, there’s little coverage about the desolate state many of the nation’s wastewater treatment plants are in, meaning a lot of nitrate reaches the groundwater every day that shouldn’t really reach it at all.”

“When we’re supposed to reduce the use of fertilizers by 20% as the government wants us to, it means that our plants get 20% less nutrients every year, and that will have a corresponding impact on our yields and our incomes,” said the farmer from Bavaria. “I’d love my son to join our business, but if you can’t live off it in the future, it doesn’t make any sense to keep him interested.”

There was agreement among the farmers gathered in Berlin that agricultural subsidies will have to continue to flow to prevent even more farms from going bust.

“If prices for our products were a lot higher, we wouldn’t need any subsidies,” the farmers from Oldenburg told DW. “But then there would also be a lot of price pressure from eastern Europe and other nations which — also because of trade agreements — are making our lives hard with their cheap exports.”

“We shouldn’t really be talking about subsidies at all,” said the farmer from Bavaria. “I’d call them compensation payments for the costs we have as a result of high production standards. Without such payments, we would have a devastating disadvantage on the market vis-a-vis nations where production standards are not nearly as high.”

There’s a general feeling among the farmers here that the government has failed to consider their interests while trying to push through even more regulation.

“Our mass protest in Berlin today really unites us farmers and is not organized by or related to a given agricultural lobby group,” the Bavarian said. “We appear as one unified group, and that will hopefully help us exert more pressure on the government to rethink its current policy.”

THIS NAZI MORON CALLING FOR CENSORING EVERYONE. NEEDS TO KEEP HIS DUMB_ASS OUT OF DRAFTS.

Organization pledges to “arrest and purge” corporate leaders who resist.