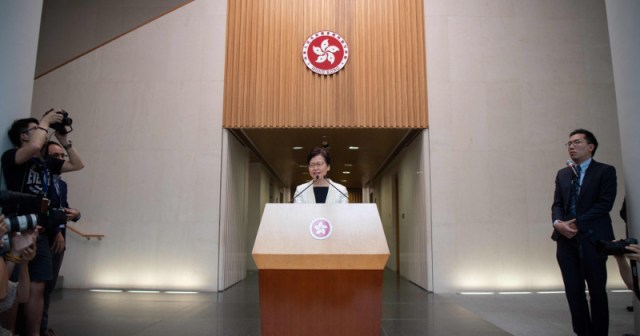 WARNING DO NOT TRUST THE COMMUNIST CHINESE! ANY OF THEM

Multiple sources close to Lam reported that she would be meeting with lawmakers today to announce the decision.

“Hong Kong leader Carrie Lam on Wednesday announced the formal withdrawal of a controversial extradition bill that has plunged the Chinese-ruled city into its worst political crisis in decades,” Reuters reports.

“The bill, which would have allowed extraditions to mainland China where courts are controlled by the Communist Party, triggered months of unrest and posed the gravest challenge to Chinese leader Xi Jinping since he came to power in 2012.”

However, protestors say the withdrawal is too little, too late.

Hong Kong’s leader Carrie Lam makes further concessions to the protesters in a TV announcement. While she made an attempt to satisfy their demands, protesters claim it’s still not what they asked for.

Here is the reply of the Hong Kong protesters to Carrie Lam’s statement: they claim the withdrawl has come too late, her concessions are a facade and they won’t back down until all their demands are met equally.

“Here is the reply of the Hong Kong protesters to Carrie Lam’s statement: they claim the withdrawal has come too late, her concessions are a facade and they won’t back down until all their demands are met equally,” reports journalist Alessandra Bocchi, who has covered the demonstrations from the ground in Hong Kong.

A huge Chinese cargo ship has unloaded troops and vehicles into Hong Kong amidst rumors of a military crackdown on protesters.