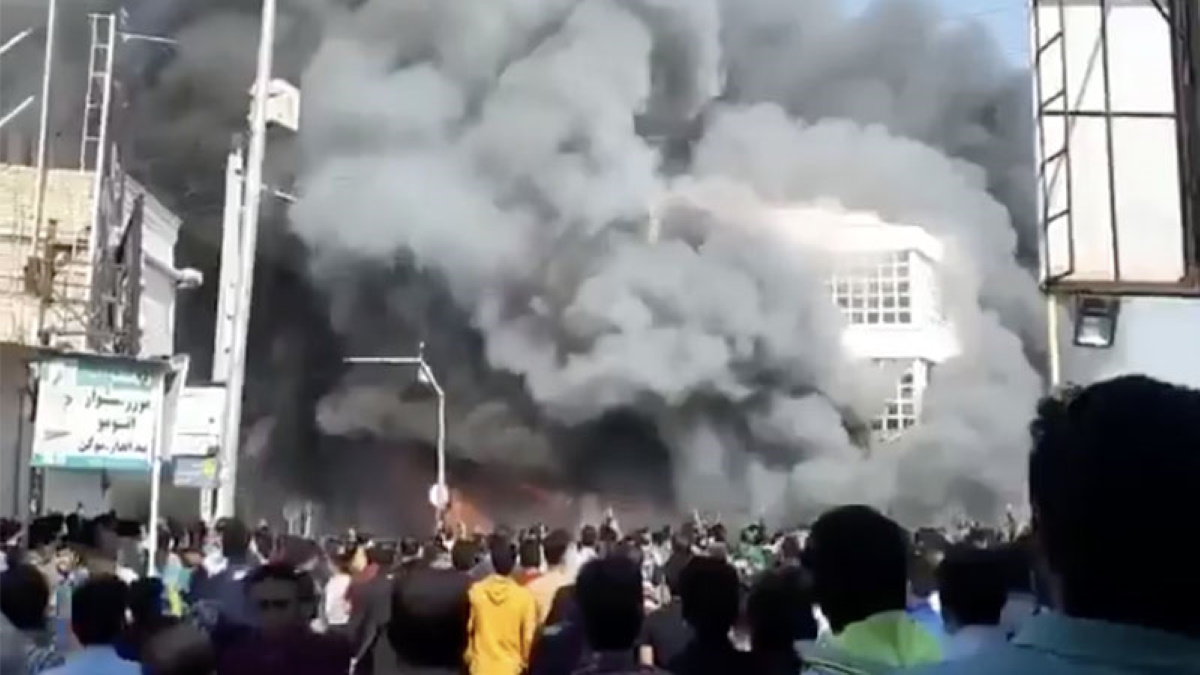 Over a dozen cities in chaos, two dead and multiple injured

With protests and unrest raging in multiple hot spots around the globe from Latin America to Hong Kong to Lebanon and Iraq, it could be Iran’s turn to join in.

Amid a fresh price hike in gasoline — the latest in a string of woes to hit the sanctions ravaged Iranian economy, ultimately making life miserable for the common populace — rare mass protests have broken out in multiple cities.

Protests and clashes with police began Friday when petrol prices suddenly rose by at least 50% after government subsidies on it were slashed. Government statements said the plan is to divert the funds in order to make cash payments to low-income households.

In essence Tehran authorities dubiously claim they were forced to “free up money” to assist the poor; however, it appears more drastic scrambling as Tehran struggles to find global purchasers to offload its oil.

And as of Saturday Reuters Persian reports that gas prices have tripled, taking millions of angry middle class demonstrators to the streets across the country.

The BBC reports that the protests are fierce enough to have already led to at least two deaths and multiple injured as demonstrations are active in at least a dozen cities:

One person was killed during protests in the central city of Sirjan. State news agency Irna said there were clashes with police when protesters attacked a fuel storage warehouse and tried to set fire to it.

Several more people were injured. A protester also died in the city of Behbahan.

In response, one protest method has been for motorists to turn off their vehicles in the middle of busy streets, blocking traffic and adding the frustration of security forces.

Meanwhile, Iranian state media has admitted that violent clashes with police are underway. As Deutsche Welle reports of the official statements:

In the city of Sirjan in central Iran, demonstrators tried to set a fuel warehouse on fire in protests that police described as “severe.”

The semi-official news agency INSA reported that one civilian was killed and several others injured.

Acting governor Mohammad Mahmoudabadi said some people had exploited the “calm gathering” and had destroyed public property and damaged fuel stations. He added it was unclear whether the victim had been shot dead by security forces who were “trying to bring back calm to the city.”

There are also reports that protesters have begun targeting banks, after video was posted online of what appears to show the Central Bank In Behbahan, Iran being engulfed in flames as demonstrators chant.

Brief local news coverage of the bank building going up in flames:

In the below video now circulating widely among Iranian opposition activist accounts, live gun fire is heard as both protest and police lines scatter.

Security forces appear to be retreating into a police headquarters amid an attacking crowd. And what sounds like live ammo is then fired by police defenders of the HQ.

On Saturday the protests have appeared to get more confrontational, as police were filmed using riot control measures against crowds, and with some unconfirmed reports of live fire being used, as has been the case over the past month in neighboring Iraq.

Iran has warned the United States that any military action against the middle-eastern nation will be very costly. Many in the US have pushed for a strike on Iran, attributing to them the recent missile strike against two Saudi oil plants.