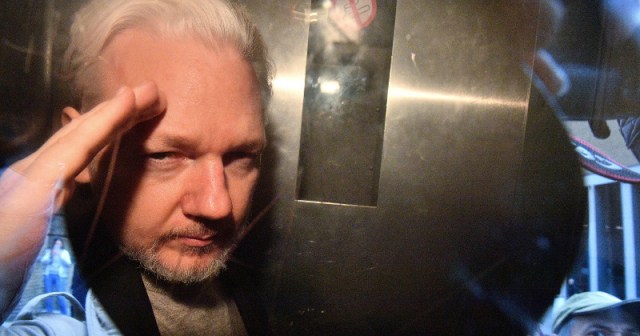 Has there been a well crafted smear campaign to dehumanise Assange and coax the public into forgetting him?

Authored by Michelle Wood via Medium.com,

In Orwell’s dystopian fiction 1984, the government’s mission through the Ministry of Truth is to supply its people with news, entertainment, books, films, plays and songs, packed with the information it wants the people to know. It constructs lies to fit the narrative it wishes to establish and sets about rewriting historical documents so they match the constantly changing current party line.

Have we slept walked our way into 1984 with the curious witchhunt of Julian Assange?

From the time Wikileaks published Collateral Murder in 2010, exposing the slaying of Iraqi civilians at the hands of merciless US Apache soldiers, in what became the biggest news story of its time, the United States has wanted Julian Assange silenced and forgotten.

He has lived in a state of confinement since May 2010 when he was arrested and jailed in the United Kingdom, lived under house arrest for a further 18 months in England and then sought political asylum in the Ecuadorian embassy from June 2012 .Yet many people think Assange was in a position where he could simply walk free.

Has there been a well crafted smear campaign to dehumanise Assange and coax the public into forgetting him? How else could he have been detained within two tiny rooms devoid of sunlight for more than six years without public commentary and concern? The apparent dismantling of Assange’s character and disinformation has been thorough. Most people do not know the specifics of his case, but “believe” he is an arrogant rapist and an ungrateful, badly behaved houseguest, smearing faeces on the embassy walls and being cruel to his cat. These disputed claims are now so well accepted it’s inconceivable that they could actually be lies.

The one surety about Assange was that he did publish secret State documents and videos. Embarrassing yes, but surely not indictable in a country that protects freedom of speech in its constitution. Never mind the fact that Assange is an Australian citizen, but far from protecting him against being tried for espionage in America, the Morrison government’s public statements have been limited to assurances that he is being treated like any other citizen with ongoing consular assistance.

Are we being served by our “free media’ in its reportage of the Wikileaks expose and the subsequent treatment of Julian Assange?

Instead of seeing the 2016/17 Democratic National Committee (DNC) email leaks as important data on presidential candidate Hillary Clinton, the prevailing narrative by the mainstream media was that Wikileaks’ handed the presidency to Donald Trump. Although the voter count showed Clinton had the majority by just over 3M votes and that Trump’s win had more to do with the American Electoral College system, the focus remained on the now debunked “Russiagate.”

Julian Assange before his internet was taken away in 2018

In March 2018, the Ecuadorian government imposed new conditions on Assange, removing all forms of communication and restricting his social visits. He was then unable to do any further work with Wikileaks and had limited connection with the outside world. His silencing was almost complete.

In April this year, Ecuador’s illegal breach of Assange’s asylum followed with his immediate arrest by UK police and a 50 week sentence in a maximum security prison for breaching bail. News organisations had been alerted to Assange’s imminent arrest by Wikileaks press releases but these were ignored. Ironically the images of the world’s “most dangerous man” being hauled from the embassy were supplied by only one agency, Ruptly, a branch of Russia Today. Without this footage how might this story have been reported?

It appears the news media is choosing not to report much of Assange’s ongoing plight. Strange, given he was once feted for his courage and innovation, winning the Sydney Peace Prize and one of Australian journalism’s coveted Walkley awards. The case against Assange concerns the criminalisation of journalism at a time when media organisations in his own country are under siege. Federal Police raided the Australian Broadcasting Corporation in June for reporting alleged warcrimes by Australian forces in Afghanistan. This followed search warrants being executed at the home of Murdoch media journalist Annika Smethhurst over a leaked plan to allow government spying on its citizens. The coverage included detailed reporting of detectives rifling through her underwear drawer.

Contrast this with the lack of reportage on some important aspects of the Assange case.

In May, the United Nations Special Rapporteur on Torture Nils Melzer visited Assange in Belmarsh Prison producing a damning report which was widely circulated, but surprisingly had little impact.

“It was obvious that Mr. Assange’s health has been seriously affected by the extremely hostile and arbitrary environment he has been exposed to for many years. Most importantly, in addition to physical ailments, Mr Assange showed all symptoms typical for prolonged exposure to psychological torture, including extreme stress, chronic anxiety and intense psychological trauma.

“In 20 years of work with victims of war, violence and political persecution I have never seen a group of democratic States ganging up to deliberately isolate, demonise and abuse a single individual for such a long time and with so little regard for human dignity and the rule of law. The collective persecution of Julian Assange must end here and now!”

How could such a grave statement not have triggered further investigation and commentary other than by independent journalists? Melzer’s horrific diagnosis involves the life of a western journalist going to a western jail for doing his job.

In July 2019 US Federal District Judge John Koeltl dismissed a DNC lawsuit against Wikileaks, emphasizing the “newsworthiness” of Wikileaks publishing activities describing them as “plainly of the type entitled to the strongest protection that the First Amendment offers.”

“If WikiLeaks could be held liable for publishing documents concerning the DNC’s political financial and voter-engagement strategies simply because the DNC labels them ‘secret’ and trade secrets, then so could any newspaper or other media outlet,” — Judge Koeltl

Even today an online search of reportage of this Federal court judgement appears to show an absence by Australia’s main media outlets such as the ABC, Nine news media and News Corporation. Would it influence the public perception of Julian Assange if more knew a US Judge considered his work to be worthy?

Recently multi-awarding winning journalist Mark Davis gave an eyewitness account refuting claims Assange was reckless and that he carelessly dumped documents endangering the lives of many. Instead he reported the Wikileaks founder took great care to redact and protect innocent people named in the trove of documents released as part of the Afghan war logs. Davis said he considered Assange acted with journalistic integrity.

Where was the mainstream reportage of the Davis testimony? Social media posts of articles by independent journalists appear to be the most reliable way to keep up with the unfolding Assange story. These are primarily shared within circles of advocates and independent media which limits their reach and sometimes creates questions about their accuracy.

This means the majority of people wont know how shocked veteran Australian journalist John Pilger was after seeing Assange in prison last month. They wont know his health is said to be deteriorating while confined to his single cell for almost 21 hours a day. Nor will they know that he gets just two social visits a month and is denied the opportunity to prepare with his US lawyers for his upcoming extradition trial.

John Pilger joined with musician Roger Waters to organise a rally this week in London to honour their friend, calling for the UK government to resist the US extradition request.

About 1000 people gathered in front of the Home Office to listen to an emotional Waters sing his hit song “Wish You Were Here”. Just as Julian Assange couldn’t hear the tribute from his cell at nearby Belmarsh, the majority of people did not hear of this public event.

The general public will likely miss the plea by Gabriel Shipton, Assange’s younger brother, who read a letter at the rally that he’d written to Australian Prime Minister Scott Morrison. His concerns about his brother’s welfare and the PM’s silence, have largely gone unnoticed by mainstream media. More silencing? More forgetting?

On September 7 on Twitter, Julian Assange’s name was trending when people started sharing an interview with celebrity and activist Pamela Anderson.

Anderson appeared on the American ABC’s long running talk show The View. As she was talked over and drilled for information, the former Baywatch star kept her cool as she schooled her fellow panellists with facts about Assange’s case and countered their claims, calling them smear and lies.

Here was a story that combined celebrity and controversy, but it has barely received mention in the Australian press?

At a recent press freedom conference in England, Special Envoy for Media Freedom, Amal Clooney, spoke of the alarm felt by journalists around the world at the Assange US indictments which “criminalises common practices in journalism that have long served the public interest.” If this is true who are the concerned journalists and why aren’t we hearing from them?

Not only has the UK government silenced Assange in prison, but the last decade of his life appears to have been censored. Who is steering the narrative in a near vacuum of information and repeated disinformation? Is there are a modern day “Ministry of Truth” behind the ongoing media blackout of one of the most influential and controversial people of our times?