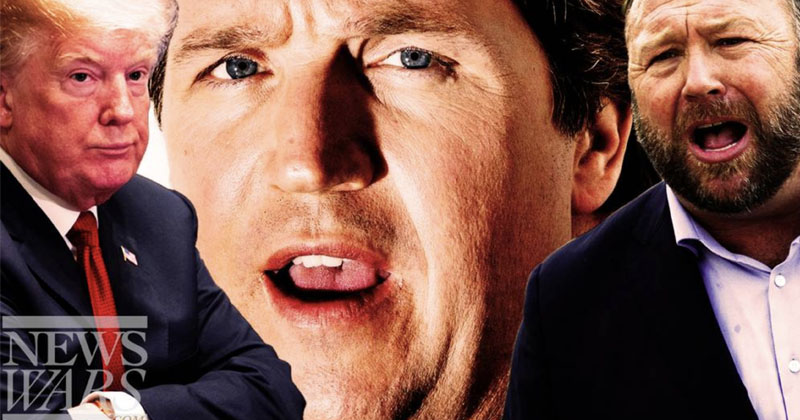 The New York Times is afraid that President Tucker Carlson could succeed where President Trump has failed.

From Farhad Manjoo in The New York Times, “Tucker Carlson 2024,” subheadline, “I tried to imagine a president worse than Trump. Welcome to my nightmare.”:

In short: What sort of character do we have to imagine occupying the White House in 2029 to make lefties like myself feel even a slight pang of nostalgia for the good old days of Donald J. Trump?

[…] Come, take a stroll with me through my recurrent nightmare: It’s the sweltering summer of 2029, and the man in charge is Tucker Carlson — that is, President Tucker Carlson, the one-time Fox News talker turned righteous, white nationalist economic populist, now in his triumphant second term, after having defeated the incumbent Joseph “Recession Joe” Biden back in 2024.

Like Trump, President Carlson spends his first term refashioning America along racial lines. But unlike Trump, whose one term is now regarded by much of the right as a best-forgotten political disaster, Carlson advances an ethnonationalist populism that succeeds in a wild, frightening fashion. His secret: competence, a commitment to true political realignment, and a brutal online political machine that represents the full flowering of the tactics and ideology first displayed during 2014’s Gamergate movement.

Our government is supposed to exclusively serve the interests of the Epstein network. As Joe Biden told a bunch of plutocrats behind closed doors in June, nothing must “fundamentally change.”

Watch the video of Greta Thunberg attempting to stare down President Trump.

Anyone who feels differently is a Gamergater, conspiracy theorist, nativist, ethnonationalist, white supremacist AND a terrorist who needs to be hunted down by Homeland Security.

Where Trump was a chaotic, undisciplined narcissist, the Carlson who wins in 2024 is a canny political strategist who makes good on Trump’s forgotten promise to embrace anti-corporate economic policies. On paper, parts of Carlson’s agenda seem ripped from the former liberal firebrand Sen. Elizabeth Warren (now in exile in Toronto): His chief enemies are Google, Amazon, Apple, Facebook and Microsoft, the megacorporations owned and staffed by wealthy liberals.

It’s a winning electoral formula: A large minority of Americans are willing to forgive Carlson’s authoritarian, nativist impulses if they see it as part of a war against the out-of-touch, culture-destroying corporations that are automating our jobs; killing every other industry; and exercising complete control over what we watch, read, listen to, buy and believe.

Don’t those rubes realize our corporate oligarchs are lording over us for our own good!?!?!?

Incidentally, I don’t think it’s a coincidence the Times titled this piece a generic, “Tucker Carlson 2024,” just so it would get top results on Google for who knows how long.

They’re total shills for Google and get the top results on nearly everything due to Google’s rigged algorithm changes, so it’s not surprising.

On Saturday, the New York Times ran an article lamenting how Tucker Carlson may have stopped Trump from going to war with Iran.
From The New York Times, “An Abrupt Move That Stunned Aides: Inside Trump’s Aborted Attack on Iran”:

In the days leading up to this moment, he had talked with Tucker Carlson, the Fox News host, who reminded him that he had come to office to get out of endless wars, not start a new one.

If he allowed himself to be pulled into a new conflict by the same people who got the United States into Iraq, then Mr. Trump could forget about his chances for re-election, Mr. Carlson told him.

The Times’ fears are not without merit.

Certainly someone must realize reengineering the entire internet to suppress populist nationalism and turning the United States into an Orwellian pre-crime hellhole where citizens have their rights taken away based off a Chinese-style social credit score implemented by the most power Big Tech companies on the planet is likely to generate some pushback.

Silencing dissidents and throwing people in prison for thought crimes is not going to fix the failures of prog-globalism.