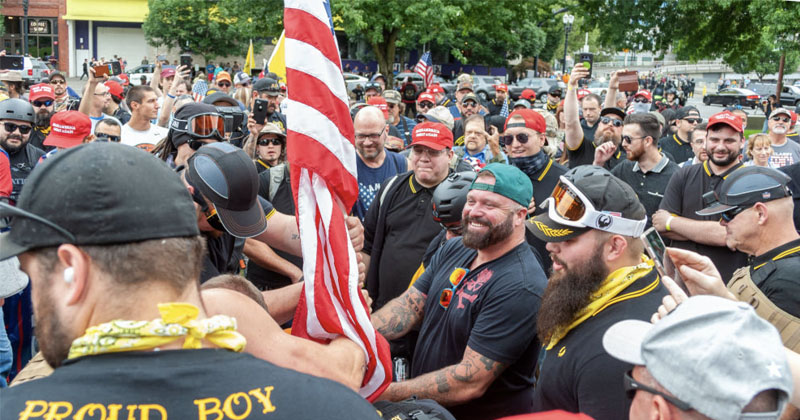 Members of the right-wing Proud Boys claimed Saturday’s clash with Antifa as a public relations victory after scuffling with the far-left group in Portland, Oregon.

“Go look at President Trump’s Twitter. He talked about Portland, said he’s watching antifa. That’s all we wanted. We wanted national attention, and we got it. Mission success,” said Joe Biggs, an organizer of the Proud Boys rally, according the Oregonian.

The showdown between the two groups in Waterfront Park. Nearly 1,000 police officers were prepared for the demonstration as protesters worked to outflank and outmaneuver one another.

Much of the chaos happened Saturday morning, but re-escalated as right-wing activists began leaving downtown in a bus. A group of black-clad demonstrators attacked and shattered the windows of one of the two buses carrying the Proud Boys members.

The demonstrations and violence escalated throughout the day. Police officers said they made at least four arrests. One antifa protester was taken away by police on the east side after being observed laying on the ground, bound by zip ties and bleeding from the head, the Oregonian reported.

Antifa is now in the road as police tell them to get out of the street.

Alex Jones is joined by veteran Joe Biggs to discuss how his “End Domestic Terrorism” rally went in Portland, Oregon on Saturday after Antifa evaded police and attacked peaceful demonstrators.