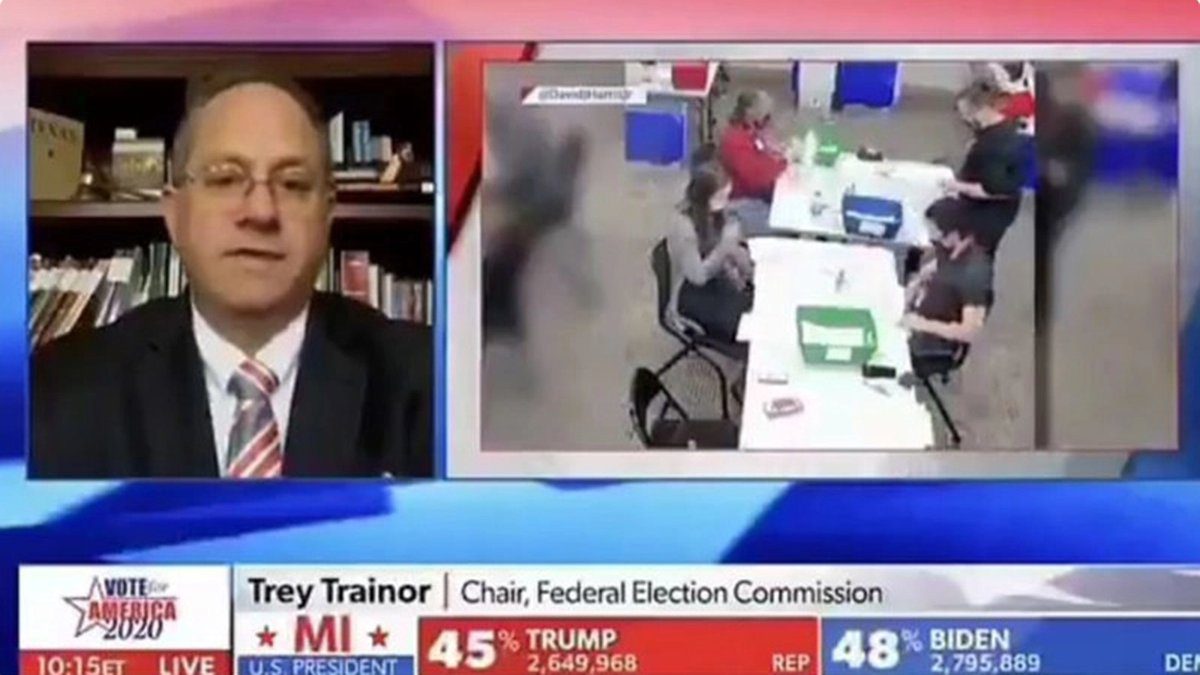 “The law is not being followed, making this an illegitimate election”

Trey Trainor, the Chairman of the Federal Election Commission, stated during an appearance on Newsmax this Thursday that he “does believe there’s voter fraud taking place,” and confirmed that the refusal to allow poll watchers to observe the ballot counting process – among numerous other irregularities – does indeed constitute an “illegitimate election.”

“I do believe that there is voter fraud taking place in these places,” Trainor said. “Otherwise they would allow the observers to go in.”

“When you have claims of 10,000 people who don’t live in the state of Nevada having voted in Nevada, when you have the video showing where people are either duplicating a spoiled ballot right there, or they’re in the process of just marking a ballot that came in blank for a voter, that’s a process that needs to be observed by election observers,” Trainor said.

The FEC Chairman added that poll observers are legally allowed to be present during the counting of ballots, and if they are refused entry to a place where the vote is being tabulated then “the law is not being followed, making this an illegitimate election.” https://platform.twitter.com/embed/index.html?dnt=true&embedId=twitter-widget-0&frame=false&hideCard=false&hideThread=false&id=1326951639878668296&lang=en&origin=https%3A%2F%2Fwww.infowars.com%2F&theme=light&widgetsVersion=ed20a2b%3A1601588405575&width=500px

Trainor went on to forecast that some of the Trump campaign’s legal challenges to the legitimacy of the 2020 presidential election will likely end up in the Supreme Court.

“Repeat violations of ballot counting procedures,” which include preventing Republicans from being present during the mail-in ballot tallying process, led to a lawsuit against the Dallas County Elections Office.

“Voters deserve to see how their ballots are counted,” Gooden said in a statement provided to the press. “Democrat-run governments on every level will do anything to tip the scales in their favor. We’re not going to let them get away with it.”

In Detroit, poll observers boarded up windows and screamed at poll observers to leave while the latter chanted “Let us in” while locked outside of the vote counting area.