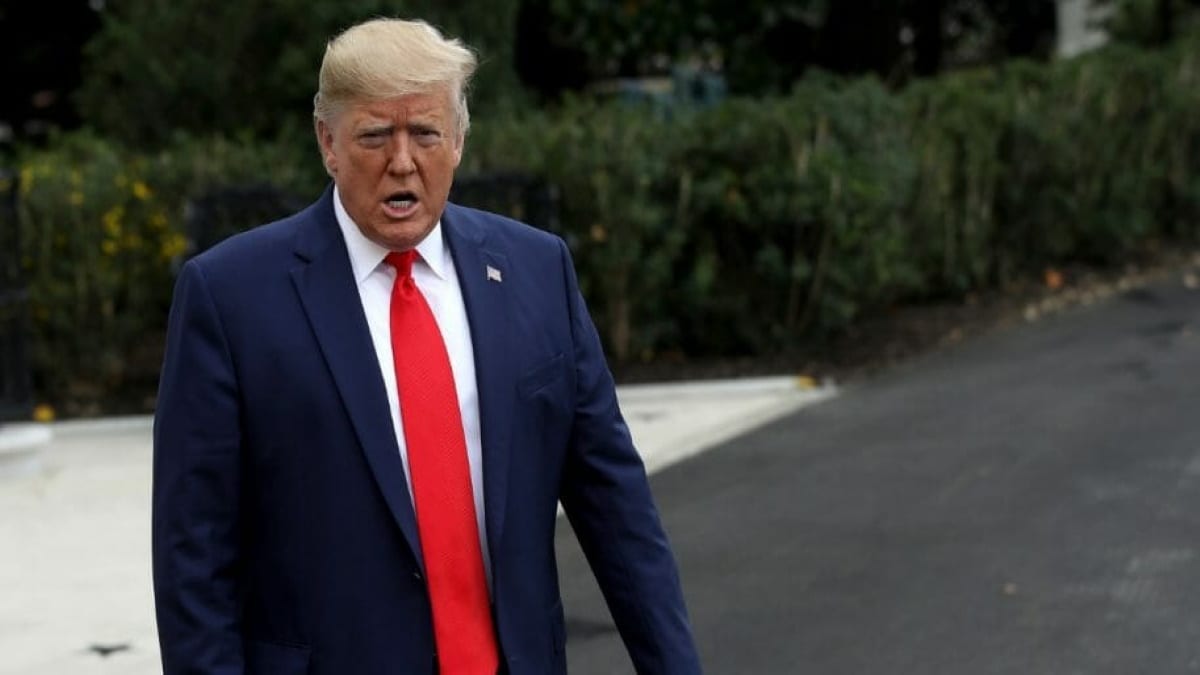 President Donald Trump walks out of the White House to answer questions on Oct. 3, 2019, in Washington, D.C.

On Sept. 24, House Speaker Nancy Pelosi appeared before the news media and announced, in the gravest of tones, that she was moving forward with an official impeachment inquiry in the Democrat-controlled lower chamber over President Donald Trump’s request that Ukraine investigate the activities of Joe and Hunter Biden in that country during the Obama presidency and his supposed refusal to turn over a whistleblower report about that request.

“The actions taken to date by the president have seriously violated the Constitution,” Pelosi said, according to NBC News.

“The president has admitted to asking the president of Ukraine to take actions which would benefit him politically,” she said. “The actions of the Trump presidency revealed a dishonorable fact of the president’s betrayal of his oath of office, betrayal of our national security and betrayal of the integrity of our elections.”

“Therefore today, I’m announcing the House of Representatives moving forward with an official impeachment inquiry. I am directing our six committees to proceed with their investigations under that umbrella of impeachment inquiry,” Pelosi added.

“The president must be held accountable. No one is above the law.”

That’s pretty dramatic stuff. Here’s the problem: The whole premise behind Pelosi’spseudo-event of a speech was a complete lie, as former federal prosecutor and National Review columnist Andrew C. McCarthy pointed out in an Op-Ed for The Hill.

“There is no impeachment inquiry. There are no subpoenas,” the piece, published Thursday, began.

“You are not to be faulted if you think a formal inquest is under way and that legal process has been issued,” he said. “The misimpression is completely understandable if you have been taking in media coverage — in particular, reporting on a haughty Sept. 27 letter from House Democrats, presuming to direct Secretary of State Mike Pompeo, on pain of citation for obstruction, to cooperate in their demands to depose State Department officials and review various records.”

McCarthy pointed out something we’ve noted and most the establishment mediahasn’t: An impeachment inquiry is a very specific thing usually requiring a vote in the House Judiciary Committee to commence. That vote hasn’t happened and presumably won’t.

But aren’t the six committees that Pelosi loosed upon the president — Financial Services, Foreign Affairs, Intelligence, Judiciary, Oversight and Reform, and Ways and Means — vigorously and expeditiously inquiring into l’affaire Ukraine?

That would constitute a de facto impeachment inquiry, after all, even if it was a roundabout one that skirted legislative norms.

That’s not what’s happening either. The committees aren’t using their subpoena power — in part or in whole, McCarthy says, “because subpoenas get litigated in court when the people or agencies on the receiving end object.”

“Democrats want to have an impeachment show — um, inquiry — on television; they do not want to defend its bona fides in court,” he wrote. “They certainly do not want to defend their letter. The Democrats’ media scribes note the chairmen’s admonition that any failure by Pompeo to comply ‘shall constitute evidence of obstruction of the House’s impeachment inquiry.’ What a crock.”

RELATED: Pelosi Insists Schiff Used ‘President’s Own Words,’ Even After Stephanopoulos Corrected Her

“In criminal proceedings, prosecutors demand information all the time and witnesses often resist — just as congressional Democrats encouraged the Justice Department and FBI to resist when Republican-controlled committees were trying to investigate such matters as Foreign Intelligence Surveillance Act abuse,” he wrote.

“Presumptively, resisting an information request is not evidence of obstruction. It is evidence that the recipient of the demand believes he or she has a legal privilege that excuses compliance. The recipient can be wrong about that without being guilty of obstruction.”

“Congressional Democrats know this, of course — many of them are lawyers. They are issuing partisan letters that pose legally offensive threats, rather than subpoenas, because this is a show, not an impeachment inquiry.”

And, as with most shows on television, it’s moving toward a narrative end: Regardless of the evidence, they’re going to try and push articles of impeachment through Congress. Sorry to spoil this season of “Democrat-controlled House of Representatives” for you.

McCarthy freely admitted that “the Constitution vests the House alone with the power of impeachment” and that “the House is a ‘majority rules’ institution, so if Speaker Pelosi and her partisans want to ipse dixit their way to impeachment articles, no one can stop them.”

He added, however, that this seems a bit show trial-y. Which, yeah. He also argued that this wasn’t the vision of the impeachment process that the Founding Fathersintended, which is also true.

“Every presidential impeachment inquiry, from Andrew Johnson through Bill Clinton, has been the subject of bipartisan consultation and debate. The House has recognized that its legitimacy, and the legitimacy of its most solemn actions, must be based on the consideration of the whole body, not the diktat of a few partisan bosses,” he wrote.

“Not this one. This one is a misadventure in exactly the bare-knuckles partisanship the Framers feared. To be sure, no one has the power to prevent willful House leadership from misbehaving this way. But we’re not required to pretend the charade is real.”

McCarthy isn’t exactly alone here. House Minority Leader Kevin McCarthy (no relation) has complained Pelosi “has yet to lay out any of the ground rules for impeachment,” The Washington Times reported Thursday.

“The California Republican said until Democrats come up with a plan for calling witnesses, allowing access to evidence and giving President Trump’s attorneys the ability to be part of the proceedings, there can’t be a fair impeachment inquiry,” The Times reported.

Even the Congressional Research Service — a nonpartisan think tank that does public policy research for legislators — has made note of the legal challenges the non-inquiry inquiry poses.

“If the House takes no new action on authorizing the investigation, the speaker’s statement that the House is launching an ‘official impeachment inquiry’ is unlikely to put to rest the debate,” the CRS said in a legal memo this week.

The problem is that Democrats don’t really have a case, according to McCarthy — but that doesn’t matter to them.

“Democrats are mulishly determined to ram through an article of impeachment or two, regardless of whether the State Department and other agencies cooperate in the farce. Their base wants the scarlet-letter ‘I’ attached to Trump. The party hopes to rally the troops for the 2020 campaign against Trump (although smarter Democrats know it could boomerang on them),” McCarthy wrote.

“If Democrats truly thought they had a case, they wouldn’t be in such a rush — they’d want everyone to have time to study it. But they don’t have a case, so instead they’re giving us a show.”

These are the very serious consequences of a fundamentally unserious “impeachment inquiry.”

It’s a made-for-TV spectacle created as a paid political advertisement but couched in the language of Congress’ legitimate duties. It should be called out for what it is, not breathlessly covered as if it it were Watergate.

To pretend there isn’t a difference is to spit in the face of the American people who know better.

We are committed to truth and accuracy in all of our journalism. Read our editorial standards.Submit a Correction

C. Douglas Golden Contributor Summary C. Douglas Golden is a writer who splits his time between the United States and Southeast Asia. Specializing in political commentary and world affairs, he’s written for Conservative Tribune and The Western Journal for four years. @CillianZeal