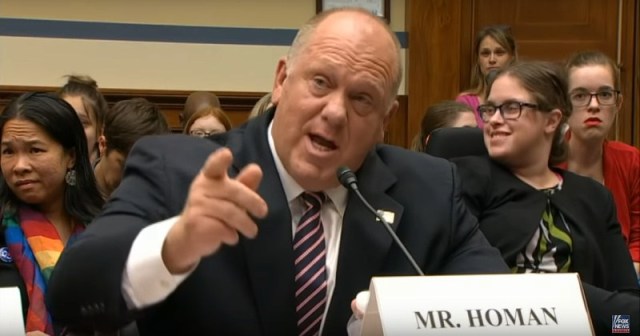 Homan was called a “bigot,” as well as “ruthless and inhumane,” by Democrats during testimony to the House Oversight Civil Rights and Civil Liberties subcommittee on Wednesday.

“I did it when I was ICE director, that’s why I took so much hate as the ICE director. Because I wasn’t gonna play political games,” Homan explained during an appearance on Fox and Friends. “I wanted to do my job and tell the American people what we do and what we don’t do and tell them the truth, but the Democratic leadership in Congress can’t handle the truth.”

During his testimony, Homan was attacked by multiple Democrat lawmakers, including Rep. Debbie Wasserman-Schultz (D-Fla.)

“I think it’s important to really make sure that the jingoistic, bigoted testimony of Mr. Homan is called out as nearly completely untrue, as being an outrage, and as a former official directing the Immigration and Customs Enforcement agency, he should know better,” she said.

Trump’s lack of new border wall highlights the need for security in light of focused efforts to collapse borders around the globe.