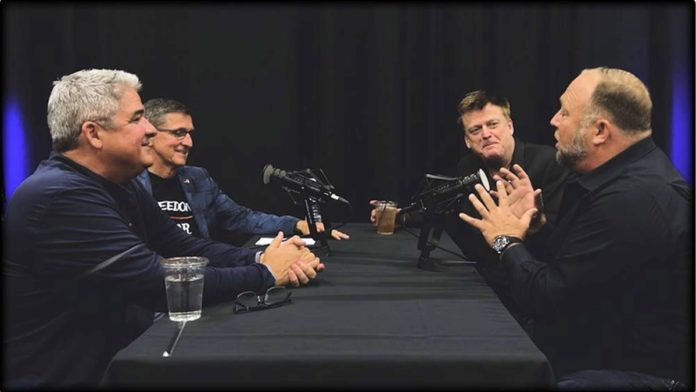 Alex Jones hosts a powerful discussion with General Flynn, his brother Joe Flynn, and Patrick Byrne over the Deep State’s plot to implode the nation.

This in-depth encounter between minds details how to stop the bloody civil war globalists are trying to unleash upon America.

The only way this information gets out is by you sharing this video!

Throughout the discussion, everyone expressed concern over what calamity the Deep State would use to foster a smooth transition to tyranny before the masses can galvanize into action – because as filmmaker Joe Flynn puts it, the globalists have “overplayed their hand.”

“I think the American people are truly waking up – I think the left has very much overplayed their hand,” said Joe Flynn. “But, will they continue to try to stuff things down our throat and do things to try to crush us? They may.”

Joe Flynn (left) describes how the next 18 months are crucial to America because the elite know they overplayed their hand.

Likewise, General Flynn shared a similar sentiment, saying the elite will usher in a controlled financial depression – or even an outright crash.

“They’re going to continue to focus on: how do they maintain control or how do they get better control,” said General Flynn. “I believe that we’re going to see a couple of things… I call it a controlled depression – some type of financial manipulation or collapse.”

General Flynn (right) warns Americans that the elite will have “no problem” financially ruining the middle class further by boosting the already drastic inflation rate.

Businessman Patrick Byrne agreed, adding that globalists are intentionally running the system into the ground so they can emerge from the rubble to control what’s left.

“There’s going to be a financial crash,” said Byrne. “The question is, do we emerge from the rubble as the USSA (the United Socialist States of America), or do we emerge as a USA stripped of the stuff that’s been going on since FDR did what got us here.”

Bryne (left) tells Alex Jones there’s absolutely no reason for Americans to get violent as he’s optimistic about the coming midterms.

Additionally, the crew breaks down the progress made in exposing election fraud, how an actual investigation into Jan 6 would expose the Deep State, and how vital it is for Americans to get involved by honoring their civic duty to preserve the America the founders created.

General Flynn tells all Americans: “These are the times now when you have to rise up and say, ‘I’m not going to put up with it anymore & I’m going to get involved in my civic duty as an American citizen to protect it for the generations that are going to follow us.”

Also, don’t miss the first half of Jones’ conversation with General Flynn where they discussed how to expose traitors in America’s government:

And of course, be sure to watch & share Alex Jones’ recent speech at the Reawaken America Tour in San Antonio, Texas: