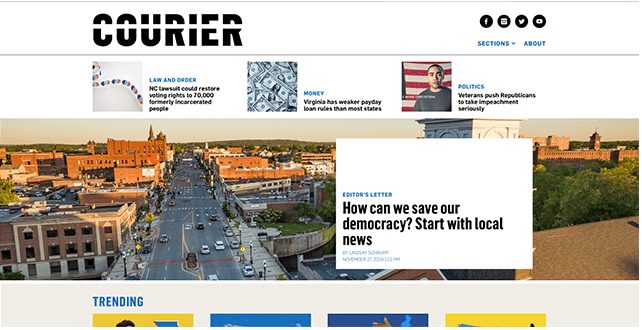 Democratic operatives who previously worked for Barack Obama are creating fake news websites, and even newspapers, which are purposefully designed to look real in order to push liberal talking points and help the Democrats win the 2020 election.

The sites fall under the umbrella of a “media company” called Courier Newsroom, headed by strategists who have made it their mission to counter ‘right wing propaganda’ on social media and the internet.

THE US IS NOT A DEMOCRATIC DEMOCRACY! IT IS A CONSTITUTIONAL REPUBLIC ! You Got That obamanite Morons

The outfit does not make readers aware of what it really is, instead it is posing as a legitimate news company employing real journalists, when it is anything but that.

Bloomberg reported Monday that the project’s main goal is to create content favorable to Democrats that can be shared and spread on social media without recourse.

The propaganda is spearheaded by former Obama strategist Tara McGowan, who has previously stated that it is her objective to craft a more virulently negative public perception of President Trump in the short term.

The New York Times reported earlier this month that McGowan, and other Obama era operatives are working with a nonprofit group called Acronym and a leftist political action committee, pouring millions of dollars into propaganda in battleground states including Michigan, Arizona, North Carolina, Pennsylvania and Wisconsin.

“A lot of people I respect will see this media company as an affront to journalistic integrity because it won’t, in their eyes, be balanced,” McGowan told Bloomberg.

“What I say to them is, Balance does not exist anymore, unfortunately.” She continued, adding “We’re losing the information war to verified liars pouring millions of dollars into Facebook.”

Explaining how her propaganda works, McGowan said “Everybody who clicks on, likes, or shares an article … we get that data back to create a lookalike audience to find other people with similar attributes in the same area. So we continually grow our ability to find people.”

Facebook has vowed to crack down on what it defines as ‘fake news’, and has removed pages belonging to scores of conservative creators. While many of those are openly and admittedly agenda driven, McGowan’s projects are clearly designed to be deceptive.

Readers will be duped into believing they are accessing journalistic content, when in actual fact they will be exposed to Democratic propaganda.

If this isn’t the epitome of fake news, then what is?