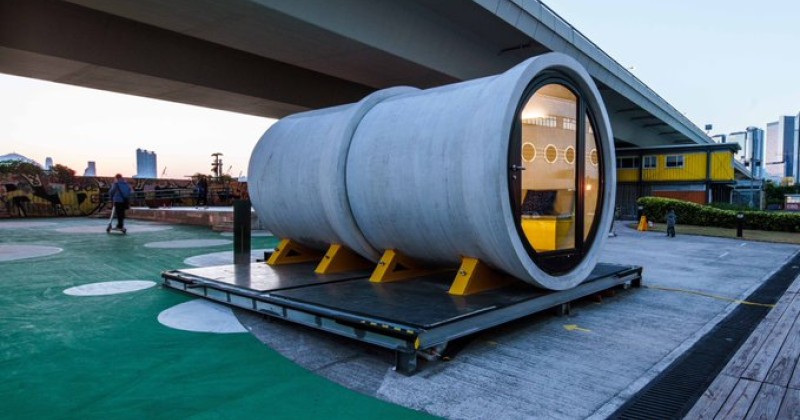 They’re called OPod Tube Houses and literally consist of reclaimed bits of industrial piping renovated inside with other left over pieces from building sites to make them into micro apartments.

“Constructed out of low cost and readily available 2.5m diameter concrete water pipe, the design utilizes the strong concrete structure to house a micro-living apartment for one/two persons,” states a promo for the product. “OPod Tube Houses can be stacked to become a low rise building and a modular community in a short time, and can also be located/relocated to different sites in the city.”

The pods are placed on spare bits of land and stacked on top of each other, allowing people to live their dream of being a human ant in a colony.

The sewer pipes are becoming more widespread in Hong Kong, where the cost of living is prohibitively expensive, but expect to see the trend transfer to the west very soon.

“The objective of architecture like the “sewer pipe house” isn’t to help humanity, but to humiliate and demoralize its occupants and those who live in the surrounding area,” commented one Twitter user who highlighted the issue.

As I highlight in the video below, young people are leaving college an average $30,000 in debt and getting jobs that pay an income which will never keep up with the rate of inflation.

Property ownership is freedom but the future for any generation other than boomers appears to be a lifetime of rent serfdom.