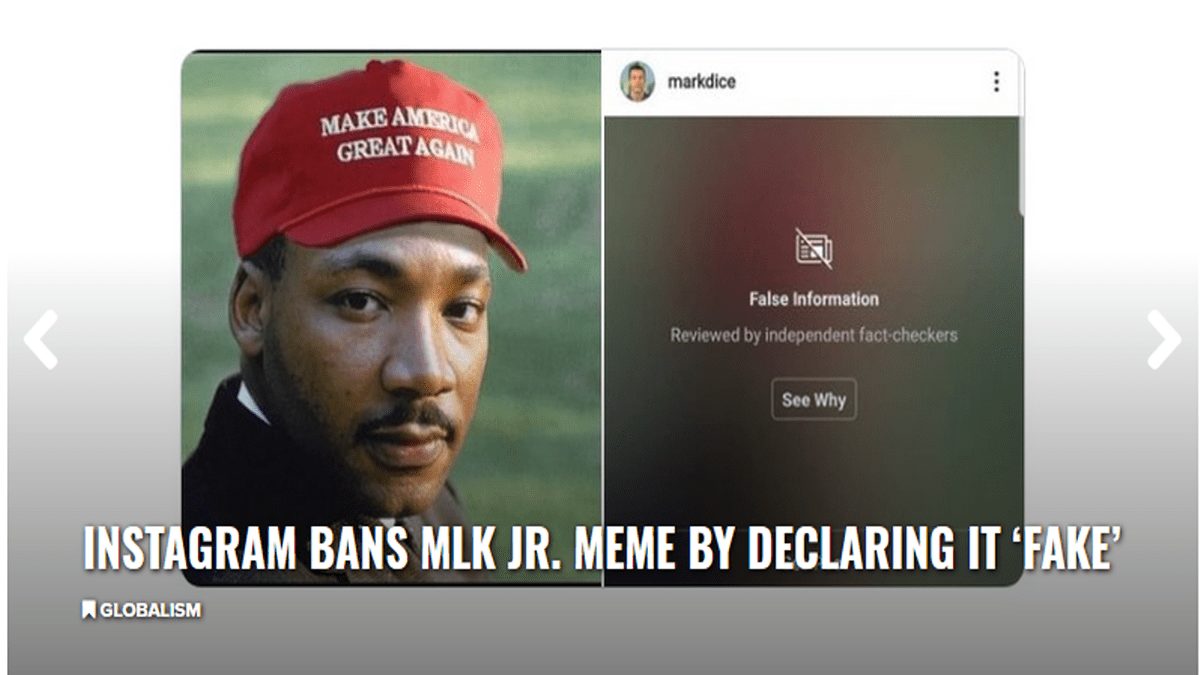 Big Tech must not want to shed any light on the conservative principles shared by Dr. King

Instagram has banned a meme of Doctor Martin Luther King, Jr. wearing a MAGA hat by declaring the image “fake.”

But it’s pretty obvious (to say the least) that Dr. King, who was assassinated in 1968, never wore a 2016 presidential campaign hat.

Actually, it’s so blatantly obvious that the fact the image is ‘fake’ must not be the real reason why it was banned by Instagram.

Instead, the Facebook-owned platform deleted it because Big Tech is likely trying to ‘curate’ the talking points on social media prior to the 2020 election.

And pointing out the conservative-leaning values of the late Dr. King isn’t convenient to President Trump’s critics – and there are many in Silicon Valley – as the president uses record low black unemployment under his watch as one of the pillars of his re-election campaign.

The Heritage Foundation stated that while Dr. King “was no stalwart conservative,” the core values at the center of his message were “profoundly conservative:”

Throughout American history, racism has posed a peculiar obstacle to the achievement of that goal. However, Dr. King believed that the Founders had set the nation on the right course. He did not reject the principles of our nation because contradictions existed; instead he hoped that racial groups would put aside their differences and acknowledge the principles that unite all Americans. Today, it is conservatives who seek to unite. In a nation divided by cultural diversity, conservatives defend and celebrate the characteristics that we share as Americans. As America drifts from the ideas and ideals of the Founders, conservatives stand with King as believers that the principles of the American Founding are as relevant today as in 1776.

In short, unlike the modern-day ‘social justice warrior’ movement, Dr. King didn’t throw out the good ideas that came from the American Revolution because there were bad institutions that also existed at the time; he simply took the good and cut out the bad.

Also, it’s worth pointing out that Dr. King’s niece, Alveda King, is a prominent pro-life advocate.

“I really believe that if my uncle were here today, he would encourage us to find solutions to the problems, even women’s problems, and all problems, without having to do violence to babies in the womb. I am just convinced that he would agree with that,” she said.

Alex Jones hits the streets to deliver a powerful message of liberty.