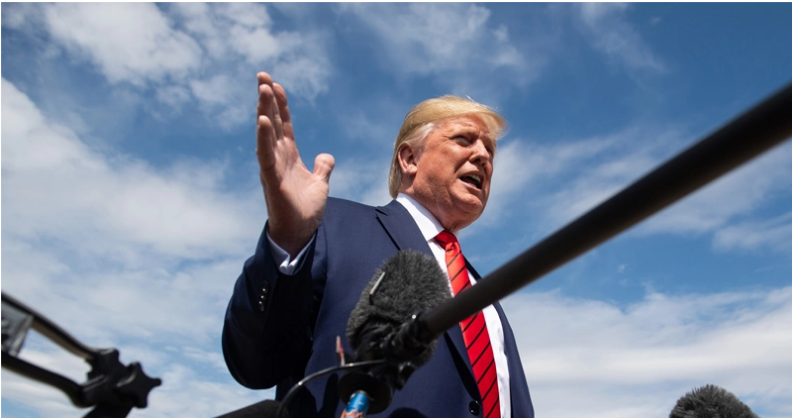 “These people are sick, they’re sick and nobody’s called it out like I do,” he says

Remarking on the impeachment proceedings against him, a gleefully defiant President Trump said “we’re at war” and mocked the mainstream media, Joe Biden and House Intelligence Chairman Adam Schiff.

President Trump was speaking at a closed-door fundraiser in New York City where he said Biden is “dumb as a rock” and that some mainstream reporters are “some of the worst people you will ever meet.”

“We’re at war,” he said. “These people are sick, they’re sick and nobody’s called it out like I do, I don’t understand, people are afraid to call it out, they are afraid to say that the press is crooked, we have a crooked press, we have a dishonest media.”

He mocked Schiff, who’s spearheading the impeachment, as a “pencil neck.”

“And then you have sleepy Joe Biden who is dumb as a rock, this guy was dumb on his best day, and he’s not having his best day right now,” he said. “…His kid, who’s got a lot of problems, he got thrown out of the Navy. I mean look I’m not going to — it’s a problem, that’s a problem, so we won’t get into why and all that.”

“But he got thrown out of the Navy, and now this kid goes into Ukraine, walks away with millions of dollars, and he becomes a consultant for $50,000 a month. And he doesn’t know anything compared to anybody in this room. He’s a stiff, he knows nothing.”

And the president suggested the ‘whistleblower’ was “almost a spy.”

“I want to know who’s the person that gave the whistle-blower the information because that’s close to a spy. You know what we used to do in the old days when we were smart? Right? With spies and treason, right? We used to handle them a little differently than we do now.”

Support fighters of liberty and freedom and get products you need at InfowarsStore.com.